The Odd Relationship Between Inflation and Experiences 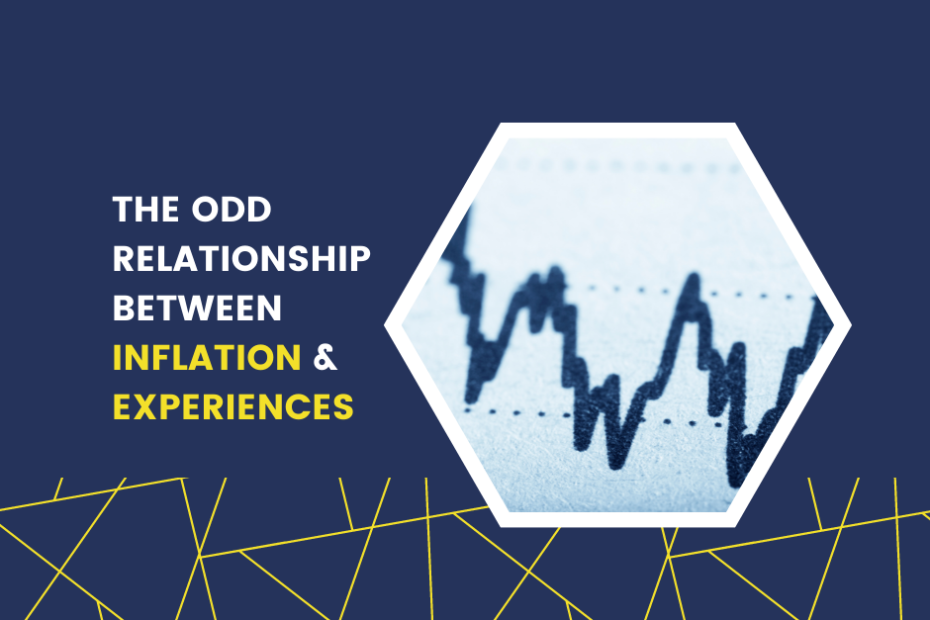 Inflation (And Consumer Experiences) Are On the Rise

We’ve been hearing a lot about inflation recently. After a generation of time when inflation did
not seem to matter, the price of many goods and services are now rising more than the rate to which we’ve become accustomed. The pandemic has brought this to the surface, with the combination of increased demand and decreased supply of materials coupled with a shortage of labor.

What I hadn’t thought about was the relationship between how the government calculates inflation and the rise of consumer experiences as a distinct form of economic offering. The second half of the 20th century saw the emergence of industries dedicated to experiences: theme parks, television, concerts, and travel just to name a few.

Experience Economy co-authors Joe Pine and Jim Gilmore have shown that experiences are as distinct from services as services are from goods. Because most people have the basic necessities of life covered, they want to save more of their discretionary income so that it can be spent on experiences. In a pair of phrases, experiences represent time well spent, while services, which are becoming ever commoditized, represent time well saved. Dropping your dress clothes off at the dry cleaner on your way to the gym is an example of paying somebody else to perform a service while you invest time getting in shape.

What the government seems to have missed, as noted in a recent Wall Street Journal article by Joe Pine, is how to properly account for the spending of consumers on experiences. They lump them in with services so the time (and money) you and your family spend at Disney World gets classified right along with what you spend at the carwash and on your cell phone bill. The article gives an example of how the cost of a one-day pass to Disney World has risen more than twice as fast as the CPI (Consumer Price Index) over the past 40 years. It’s not because it costs more to run Disney than other service businesses. It’s because Disney’s aim is to provide an overall experience that is valued higher by consumers than the average “basket of goods” measured for inflation. Disney and many other experiences are doing well financially, even taking into account the pandemic and its hindrance on people gathering physically.

As I’ve stated many times, consumers are willing to pay more for better experiences and this holds true for healthcare as well as every other consumer-facing industry. The key for medical practices is to recognize that you don’t just raise fees “because you can” but instead focus on making the experience increasingly better so that it differentiates your offering from that of others in the community who provide similar services. Otherwise, you have only earned the right to raise prices to keep up with increased costs (ie, the rate of inflation).

One of the key ideas from Beyond Bedside Manner is that “time is the new money,” which flies in the face of striving for maximum efficiency in terms of how many patients can be seen in a day. As Joe Pine states in the WSJ article:

Consumers also value their time more highly than they used to.
They want goods and services to be commodities—bought at the
lowest possible price and greatest possible convenience—so they
can spend their hard-earned money and their harder-earned time
on experiences, they value more highly.

The concierge medicine model has proven that limiting a schedule to see fewer patients and provide a more personal level of care can be economically feasible for both doctors and patients. The growth of elective procedures in refractive surgery, aesthetics, and dentistry shows that patients are willing to pay directly for services.

The key to future growth: design medical encounters to live up to that notion of “time well spent” to such an extent that more and more consumers will value your healthcare offering like they do other experience-based
offerings. Maybe even more so than that trip to “the happiest place on earth.”